Skip to content
Best Book Recommendations Honest Book Reviews
By Badmommy November 2, 2018March 31, 2019
FYI...my posts may contain affiliate links. This means that if you click on those links and make a purchase, I will receive a small commission at no cost to you. And those commissions are what makes it possible for me to blog. Thank you!

Today is Book Lover’s Day! It’s celebrated the first Saturday of November…and for some reason, it’s also celebrated every year on August 9th. Why 2 days? I have no idea. But the more days to celebrate loving books, the better. Every day could be Book Lover’s Day as far as I’m concerned.

To celebrate this momentous occasion, I’d like to present to you 4 books that are about Love that I think you should curl up with on this Book Lover’s Day. And if you know me, you know I don’t do sappy romance, so if I liked these, you should read them too.

Why 4? Probably because it’s late and I still have to do my NaNoWriMo words for the day and I’m too lazy to come up with 5 books.

None of these (with the exception of the first one) are blockbuster bestsellers. I think the world is missing out—try one of these lesser known authors for Book Lover’s Day.

***Also, if you click on these links and make a purchase, I will receive a commission, at no cost to you. And if you guys want to be able to read late into the night without keeping other people awake, this book light is AWESOME. I highly recommend it…I have bought THREE of them in the last two months!

Where the Heart Is by Billie Letts

I can count on one hand the number of books that I’ve read more than once. I figure, there are so many great books in this world, I want to read as many as I can and not waste time re-reading ones I know the ending to. With the exception of only a few books—Where the Heart Is is one of those books.

I think I fell in love with the character of Novalee before the end of the first chapter. Here she was, 17 and pregnant, traveling with her jerk of a boyfriend to California, her life in tatters and all she wants him to do is feel the baby’s heartbeat. When he won’t do it, that’s what makes her cry. Not the fact that they don’t know where they’re going to live or that they don’t have money. It’s the fact that she realizes her boyfriend doesn’t love this baby like she does.

Aforementioned boyfriend proceeds to abandon Novalee in the next few pages—at a Wal-Mart of all places. This is where Novalee gets her life on track. Which is weird because you would think that being left at Wal-mart would be absolute rock bottom, but not for Novalee—being left in the Wal-Mart ends up being the best thing that ever happened to her because she makes the best of it.

***By the way, this movie was also one of my favorites, but it does change the book a bit. In the movie Novalee hates the number 5 and in the book, it’s 7…I don’t know why, but things like that drive me nuts. Like, why couldn’t she just hate 7 in the movie? What’s the difference? (Besides 2…lol.)

Hadley St. Clair’s father cheated on her mother. It destroys her family, but in the midst of all the destruction, she meets Sam Bennett, a boy she feels an immediate connection to. But Sam has a secret that could destroy their relationship completely.

*Sigh*. This is one of those books you feel a sadness in your bones when you finish it. This was John Green, only better.

I’m not a hopeless romantic at all…I rarely even read romance, but I couldn’t get enough of Hadley and Sam surprisingly. At times I even forgot they were only teenagers because of the maturity they had to display after their parents’ poor choices. They really came to life and almost seemed to jump off the pages. Excellent book. You have to read this book, I highly recommend it.

The Awkward Path to Getting Lucky by Summer Heacock

When I first won this from Goodreads, I read the blurb on the back cover and cringed. It seemed crass and plotless. I felt like it was going to be one of those harlequin romances my grandmother used to hide in her nightstand because it was so dirty.

For the record—I don’t read “those” kind of books. I even put the book aside for a few weeks, vowing never to read it unless I was desperate.

Well I decided to take the plunge when I ran out of books to read and I’m delighted I did. While the subject matter was a bit unusual and of the “adult” variety, this was not some trashy bodice ripper that I was expecting.

It was a delightfully crafted foray into relationships—sexual relationships and even friendships. The characters were witty and their interactions made me LOL. The women talked like truck drivers and embarrassed the men. It was hilarious.

While the plot itself was predictable (as chick lit is expected to be), the way the plot developed was unexpectedly funny and even a little raw at times. Seriously, all the feels. Congrats to the author on creating genuine and flawed characters that the reader can actually feel for and relate to. I’ll be looking for more by this author.

In a chance encounter, Fallon meets Ben the day before her scheduled cross country move. Her eventful life becomes his muse, because of course, he is a novelist. They meet every year on the same date, until one year, Fallon starts to question everything she knows about Ben. Was their first meeting, really a chance encounter or is Ben hiding a secret from Fallon?

I originally picked up this book because, based on the cover, I thought it was a suspense novel. I briefly skimmed the blurb and got a suspens-y vibe so I started the book. Just to clarify, I don’t read romance. I repeat…romance is not my thing at all. It usually makes me want to barf at its cheesiness and predictability.

That is, until I read Colleen Hoover’s brand of romance. It should I say, romance with a mystery wrapped in it. What a fabulous, poignant novel! I literally read it in one sitting at the beach and could not function in the real world till I finished.

***This was my first Colleen Hoover novel—she is fantastic—funny and has a crazy ability to wring your heart out with emotion. I’ve even met her at a book signing (and acted like a total fan girl) and she is everything I thought she would be.

Even Colt is ready to read for Book Lover’s Day! (Also, he’s annoyed with me for taking pictures.) 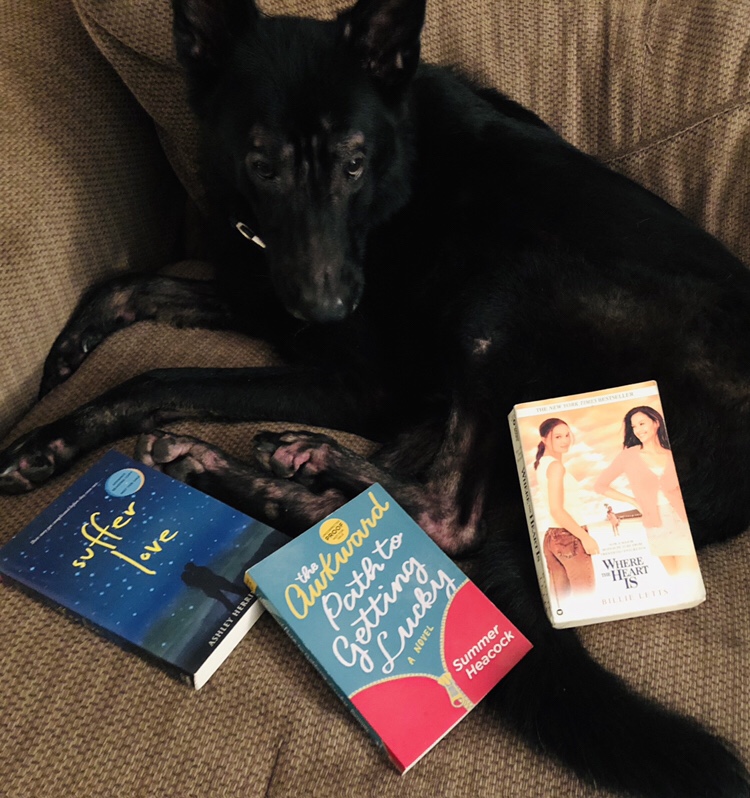 VIEW ALL POSTS BY Badmommy

Warning: count(): Parameter must be an array or an object that implements Countable in /home/customer/www/badmommyreads.com/public_html/wp-content/themes/blogger-era/inc/widget/widget.php on line 255

This website uses cookies to improve your experience while you navigate through the website. Out of these, the cookies that are categorized as necessary are stored on your browser as they are essential for the working of basic functionalities of the website. We also use third-party cookies that help us analyze and understand how you use this website. These cookies will be stored in your browser only with your consent. You also have the option to opt-out of these cookies. But opting out of some of these cookies may affect your browsing experience.
Necessary Always Enabled

Any cookies that may not be particularly necessary for the website to function and is used specifically to collect user personal data via analytics, ads, other embedded contents are termed as non-necessary cookies. It is mandatory to procure user consent prior to running these cookies on your website.